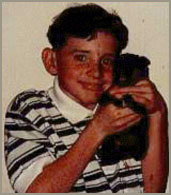 Luke was diagnosed as hearing impaired at the age of 11 months. At 2 years of age an Auditory Brain Stem Evoked Response (ABR) showed him to have a severe loss in the right ear and a profound loss in the left ear. We went the conventional route with homebound therapy until age 3, then public school early education program. Along with that he attended speech therapy and until age 3 he attended a special pre-school program at the speech center. During this time it was our decision, based on what we saw as Luke strengths, to raise him as an oral child. Luke was most happy in the oral environment and that was that. The public school route was not working. Luke finished 1st grade unable to read. This greatly disturbed me because before starting 1st grade he was reading and had finished reading the first primer book required. I’m not even going to mention all the trouble we had in the public school system. We were not happy with their expectations for Luke. Most of all Luke was not happy. It was at this time we began home schooling Luke. He progressed very well the first year home and began reading. Midway through the second year we hit a wall and could seem to make no progress and were very distraught. At this time we sent Luke away to oral residential school for the deaf some 150 miles from home. He was 9 1/2 years old and my heart was breaking. During this time I was still looking for a way to help Luke and keep him at home. I discovered NACD and asked to be placed on the waiting list.

I walked into my first evaluation with varied emotions. From uncertainty and doubt to down right fear. I’d listened to the tapes “The Miracles of Child Development,” but I was so scared and nervous that I couldn’t remember anything. NACD and Bob Doman believe that the parent is the greatest expert on the child and the most motivated to help. We’d been to so many “evaluations.” These other “evaluations” were more of me than Luke and I was told things like I was the one with the problem because I couldn’t accept my child’s handicap. I was worried, would he see the same child I see or would he see the one most evaluators saw? Luke is a master at giving you what you want to see. If you expect him to be the poor little deaf boy he will play that roll very well. I have to add that I was there alone. My husband saw our trip to NACD as another evaluation” and most likely a waste of time and money. Was I surprised when the first thing Bob said to me was that his learning disability was more of a problem to him than his hearing impairment. His auditory and visual digit spans were only 4. I became so excited finally someone who saw what I saw! I’d been trying for years to convince people that he had a problem other than being hearing impaired. He also told me I had a very bright child which I was convinced of although some had tried to convince me otherwise. I left the evaluation excited and ready to start to work. I knew that now I had a plan and the support I needed. When we came to that cross road where one road lead to school and the other to home, Luke and I together chose home. Much like the poem, I felt we had chosen the road less traveled.

The results were almost immediate. He loved doing the program and so did I. Finally something concrete to do that will help him. His reading began to improve and he was great in math. He began to ask questions and was interested in what we read. His vocabulary and articulation improved. Everything was going so well. His Auditory Digit Span is now 6 and his Visual Digit Span is 7.

Nine months later at his 4th evaluation, Bob suggested Auditory Enhancement Training. This was the turning point in our lives. It was not a new concept to me. I had done some investigating into it but was always told that they hadn’t worked with any hearing impaired children. He needed new hearing aids at the time so we simply put it out of our minds. Bob’s suggesting it simply reinforced our feeling that it might help and it couldn’t hurt. Luke began Auditory Enhancement Training in February 1995. We noticed a change the first day. He loves to whistle like his brothers do. Everyone else hated it because it was a very flat and annoying sound. Suddenly I began looking around for his brothers because Luke didn’t whistle like that. His voice began to change and we noticed more tonality in his voice. For some reason he began talking about he was the 5th child and Will as the 1st. I’d given up teaching him ordinary numbers two years before. The real acid test, as I say, was what his siblings saw. Luke has two brothers and three sisters none of whom have ever given him a break. They have always treated him like everyone else, not giving him an inch because he couldn’t hear. Shortly after finishing Auditory Enhancement Training he was sitting with his 16 year old sister as she listened to the stereo. He was dancing and swinging to the music with no hearing aids on. His sister looked at me with tears in her eyes, and said “he hears that.” Shortly after that, his brother (14), came downstairs to tell me “Boy! He sure is hearing better.” When I inquired as to why he felt that, he told me that he was talking behind his back and called him a name (something that he use to be able to get away with), and Luke turned around and hit him. Other people started commenting on how well he was talking and asking us what we were doing different. He was going through his speech cards so fast that his therapist couldn’t keep up and ended up working on conversational speech with him because she didn’t have new words for him to work. She also informed me that at a recent annual review of clients, the Ear, Nose and Throat Doctor on the board tossed his speech report back to her telling her that she had the wrong speech report with the wrong audiogram. He claimed no child with that amount of hearing loss could have a speech report like that. She passed it back to him telling him that Luke was a very unique child and that he had parents willing to work with him.

When Bob suggested we try Auditory Enhancement Training again and see if we could gain anymore we jumped at the chance. This time did not go as smoothly as the first as he became highly emotional during training, his articulation dropped off, his speech was unintelligible, his behavior was at its worst and he began wetting the bed again, something that he’d stopped doing after the first round of training. He continued to wet every night throughout the training. You can’t imagine the panic we felt with the deterioration of his speech. Bad behavior, emotions and bedwetting were nothing in comparison. A call to Utah reassured me that it was normal and temporary.

I can’t tell you exactly when it changed but suddenly he was calling home on the telephone from his friend house down the street, and even leaving messages on the answering machine. One evening he called to see what time he had to come home. I told him 7:00 and his answer was “But it’s 6:30 now!” He was not only talking to me on the phone but understanding what I said. His vocabulary increases daily as he is beginning to talk more like a normal 11 year old, slang and all. As his vocabulary and speech improved his social life has soared. Recently he and two of his friends met three little girls at the movies. He was asked by his friend to attend the Cowboy vs. Green Bay playoff game. He often stays the night with one of his friends. He has begun to serve as altar boy at church with his brothers. He’s independent and sure of himself. Recently he began Karate and attended his first tournament where he placed 1st in sparring. This was exciting but not the high point for me. It was when he was directed to the tournament table, after receive his trophy, ALONE, and was able to answer their questions and give them his name and phone number with NO hearing aids in. I was more than proud. Our local Superintendent of schools attends church with us and recently Luke walked up to him, stuck out his hand and announced “I saw you on T.V.” A very astounded superintendent answered “Yes, you did,” and they continued to talk for a few more minutes. It’s been almost 6 months since our last Auditory Enhancement Training Session and we’ve recently seen another change in his speech with many new words, excellent sentence structure, and mature conversations.

All of these things may seem normal to you but for us they are miracles. Long ago we had begun to believe that our child would never have a normal life, never read better than a 3rd grade level and be trapped in a world by himself, and only able to communicate with a few people. This is no longer true. He’s out going, sure of himself, well liked and fun to be with. He has an incredible sense of humor, and most importantly can laugh at himself. Before NACD and Auditory Enhancement Training he was lovingly called “Wild Man.” We now jokingly call him the “Question Man” because he has a question for every thing you say. His personality has grown and matured. We’re looking forward to Luke future now with excitement. Each day brings new accomplishments and new goals. We can’t wait to see what else he can accomplish. We now know that he can do whatever he sets his heart on.