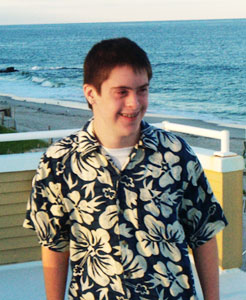 It’s that time of year when many high school seniors look forward to being accepted to the college of their choice. In the Lyons household, there is big reason to celebrate, as Bobby learned that he was accepted to a college in New York state, where he plans to major in Sociology.

Many would say that the parents never should have aspired so high for Bobby. His mother, Nancy, disagrees. “Don’t put limitations on your child,” she said. “Expect the same thing out of your [special needs] child as you do your other children.” Very few children with Down Syndrome have reached this coveted goal of being accepted to a regular four year college program. When we asked Nancy how she believes she and Bobby achieved this goal, she felt that there were many factors.

Having worked with NACD for many years, Nancy looks back on early program activities such as structured play and receptive language flashcards as being significant pieces. She also talked about crawling in cross pattern and learning organized movement.
She recalls working with Bobby on expressive language, stressing the significant role of his sequential processing. “Digit spans were huge,” she stated.

Bobby attended public school with his mother working with him on his NACD program after school, on weekends, and during the summers. One thing that she found extremely helpful was putting school information on audiotapes and having Bobby listen to them over and over again. She also worked with him on digit spans; and later he worked with Simply Smarter on his own. Over the last six months, Bobby has implemented his program independently, checking in with his evaluator to report how he is doing.

Bobby is a gracious and social teen. He has participated in many school activities, including drama and track. He has volunteered at a soup kitchen. Nancy stated that she always felt that he needed “better than average” manners. She stated that people think that if a child with Down Syndrome acts inappropriately that they “cant help it,” and she did not want people to view her son in this way. She did not expect him to act like other kids his age; she expected more.

The Lyons family has two children on program and a third child who is evaluated periodically in order to stay on track. Their daughter will be attending the University of Pennsylvania.