Such a simple word with such profound ramifications. If you look it up in the dictionary you’ll read:

Hear: \ˈhir\
transitive verb 1: to perceive or apprehend by the ear 2: to gain knowledge of by hearing 3 a: to listen to with attention : HEED b:ATTEND <hear mass> 4 a: to give a legal hearing to b: to take testimony from <hear witnesses>intransitive verb 1: to have the capacity of apprehending sound 2 a: to gain information : LEARN b: to receive communication <haven’t heard from her lately> 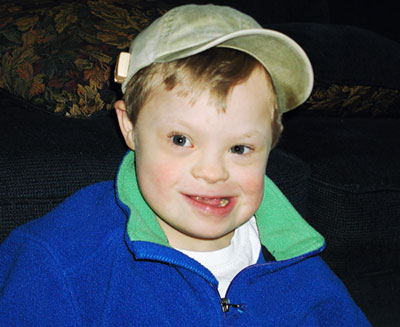 And yet this was one of the most difficult areas of my journey with Sam. Sam was born with Down syndrome, in his first year he suffered a brain injury due to oxygen deprivation which manifested itself with weakness on his right side. He was diagnosed with dysphagia and Apraxia. These areas of diagnosis were pretty easy to get. However, the diagnosis of hearing loss was not so easy.

From early on my gut feel was that Sam could not hear well. When I questioned his ENT he immediately agreed to a hearing test however Sam did not cooperate with most of it but he did react to some sounds so they indicated that his hearing was in the normal range. For a while I let the subject drop but it still nagged at me. Sam learned to read and began to speak although much of his speech was cued from his reading but he rarely answered questions correctly and had a great deal of difficulty picking up on new words unless he read them first. I felt a great deal of his frustration stemmed from him not being able to hear well.

I went back to his ENT and he suggested we do an ABR hearing test. I was hoping this would finally confirm my gut feeling, however, we were told that the testing showed that his hearing was normal. My Mom and I even questioned the doctor asking if he didn’t have Down syndrome or his other issues would his hearing be in the normal range? Often times I have been told my medical professionals things such as “Sam’s muscle tone is good”…however they forget to add the statement for a child with Down syndrome.

Our Wisconsin Chapter of NACD opened and Bob Doman came to do the first set of evaluations. He watched Sam for quite some time and then said to me, “Sue, I don’t think he can hear well.” I wanted to hug him, I finally had someone who agreed with my gut feel about Sam. I now felt a renewed drive to get Sam the help he needed.

I went back to my ENT and again questioned Sam’s hearing. He checked for fluid in Sam’s ears and asked me about ear infections. The majority of Sam’s tympanograms were normal and he only had 2 ear infections since his birth. It was at this point that our relationship took a slight turn down the wrong path. I began to hear statements like, “Well, Sue you have to realize he has Down syndrome and Apraxia so that is why he is having difficulty understanding and speaking.” “We can do another hearing test but it probably won’t show anything.” “I think your gut feel is incorrect and stems from his other issues that are causing your concerns.” I just wanted to scream, “WHATEVER!!…you’re not listening to me…I want him to hear.”

I asked about a trial hearing aid but was told that it could possibly damage his hearing instead of helping him. I purchased a personal FM system to use with Sam but he didn’t like wearing the head set. I worked with Sam using a karaoke machine with some success with new words. I then started the Listening Program with the bone conduction head set. I had done the Listening Program previously but didn’t see the effect that other parents talked about.

The bone conduction system was different…Sam’s speech increased and we finally went up another level in his auditory processing. Now I was getting excited. I went back to his ENT to tell him what I was seeing but he was stuck in the old responses and didn’t feel this had to do with Sam’s hearing. I asked him about a trial bone conduction hearing aid and I was told that he wouldn’t even consider it until we made sure Sam’s issue wasn’t with fluid. I said, “Fine, let’s put tubes in and that will take care of any fluid”. The ENT said Sam’s tympanograms didn’t show enough fluid to warrant surgery. I was up against a wall and unfortunately Sam was the one who was suffering. I prayed and I started searching for a different ENT although in our area Children’s Hospital is the easiest to work with in regards to Title 19.

I went to a conference and heard Dr. Andrew Hotaling an ENT from Loyola University speak about children with Down syndrome. He seemed to get it and I decided to take Sam to see Dr. Hotaling and he agreed to have tubes put in. I wish I could say that when the tubes were in we saw a remarkable change in Sam…but we didn’t. Dr. Hotaling’s office attempted to do a hearing test with Sam but after the two hour drive down to the office and his normal appointment, Sam again decided not to cooperate.

We returned to Sam’s original ENT. Needless to say he was amazed that Sam had tubes and when I again asked about a bone conduction hearing aid he said “Fine, have him do another round of hearing tests but I don’t think it will do any good”.

On my way to meet with the audiologist I prayed. I told God that this has been a 3 year journey and if I am on the wrong path, please let this appointment decide it and I will move on. I met with the audiologist and explained Sam’s history. I also explained how we have not had much luck getting Sam to cooperate in the booth. I told her about my experiences with the bone conduction headphones and the difference in Sam that I had seen. We worked out a plan so that as soon as Sam came into the office he would go right to the booth, no waiting time. I also stayed in the booth with him to help keep him engaged in the task and to help alleviate his frustration.

I held my breath as we started the test. Sam was cooperating…I was thanking God…and in a very short period of time it became evident that there were certain sounds that Sam did not hear. We then tried a bone conduction band on Sam which took some time to get him to cooperate with, but when we repeated the test he did better. I waited until we came out of the booth and the audiologist finally said the words I had been waiting to hear, “Sam has a conductive hearing loss in both ears”. I hugged her, thanked God and finally felt at peace. Most people would not get excited when they find out that their child has a hearing loss but I had waited for so long for someone to finally confirm my suspicions…I was thrilled.

Sam received a demo bone conduction hearing aid. I was so excited to tell Ellen, Bob & Lori Riggs that Sam finally had a hearing aid. However, I was concerned on how I would get Sam to wear the hearing aid since he has a lot of sensory issues about his head. Ellen assured me that if he can hear he will wear it. The demo hearing aid came with a band and Sam quickly learned how to remove it and boomerang it across the room. I was discouraged but decided to continue working with him and ordered a baseball hat that the hearing aid could be connected to. When the hat came it was easier to keep the hearing aid on and he could adjust it himself…he wore it and he was happy.

The changes in Sam began at that point…I often asked Sam “Where did we go on the airplane”…Sam would say “High up, in the sky”. After receiving his hearing aid, I asked him again and he stopped, scratched his chin, and said “Hmmmm….Mexico”. When he answered correctly it brought tears to my eyes and I said to myself, it is in there, he does know…it’s not the Down syndrome or the brain injury…he just couldn’t hear. We saw more and more changes when he received his brand new Baha Divino Bone Conduction Hearing Aid. One morning as I was cleaning up the kitchen I dropped a plate…Sam came running in and said, “OH…..MY….GOD”. Knowing I had never fast flashed that phrase, I asked him where did you hear that? He told me “iCarly”, the Nickelodean show he was watching the previous evening. This was amazing because Sam didn’t usually pick up on auditory phrases.

Now it would be great if I could tell you that the hearing aid has him speaking clearly and always answering questions correctly…but I can’t. I have learned with Sam that there is no quick fix…but instead pieces of a very complex puzzle. The hearing aid is an answer to my prayers and is yet another piece of the puzzle to help Sam reach his full potential. We are still working on active listening, a trait none of the males in my home seem to have??? We are re-inputting words to help Sam hear them correctly and we are actively working on daily directions to allow Sam the experience of hearing and following instructions. Sam is learning turn taking, allowing him to stop and listen, think and then respond. We still have a long journey ahead of us but we are again moving forward and making progress in areas we seemed to have stalled on. Sam’s frustration during doctor appointments, haircuts, and dentist appointments has been reduced as we are now able to explain and talk him through these situations. He is becoming more confident in speaking to people outside the family and his vocabulary is again expanding now from words he has heard instead of words he has read.

My current favorite game is to pick a task…like making breakfast and having Sam talk me through it. Now with his hearing aid, I can ask him where the eggs are and he says, “In refrigerator”. I then get them and put them on the stove. He says “No, Mom..get a pan”. I then put the eggs uncracked into the pan, he says “No, Mom…open them” and so on. Previously we would not have been able to do this because he would have given up on conversing or would have found in too difficult to follow my lead.

When I started with NACD…I wanted one thing more than anything else. I wanted to be able to have a conversation with Sam. With the addition of the hearing aid I now feel closer to that goal and that we are finally on the right path. I still get very excited every time he takes his pointer finger next to his ear and says “Sound?” and I say, “What is that sound”, he listens and he answers me.

Going back to the definition of the word hear, I am so excited that Sam now has the opportunity to:

gain knowledge of by hearing, to listen to with attention, to gain information : LEARN