Mila, our little girl with Williams Syndrome, a genetic disorder, has been discharged from special education this morning…because she’s obviously too bright. 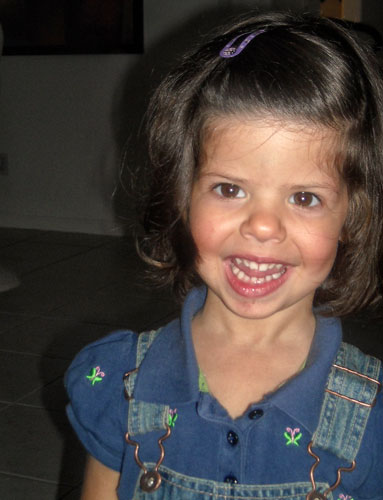 Mila is three years old and has been with NACD for two years on program. When she was younger, we were told by other experts (not NACD), “Your child may never button her own shirt.” “She may never write well.” We were told that she would never attend regular school and that she would have social issues. Children with Williams Syndrome are typically good at speaking, but they often have problems with comprehension.

We had decided at the beginning of the school year to enroll her at her sister’s Montessori preschool so that she would be with “normally-developing” children. But in order to leave the door open to a potential enrollment in an ESE program, we still needed to go ahead with what they call an “individualized education plan”. That plan requires testing, and that happened this very morning.

She had a psychological profile measured, speech testing, physical testing and the famous I.Q. The results, to me, are beyond belief.

First of all, the psychologist didn’t see “any cognitive issue with Mila;” the physical therapist said she was on the threshold of her age-group, but not exactly behind (just a little less strong and fast but with an enormous potential); but the biggest surprise was the I.Q. score. Individuals with Williams Syndrome typically score between 55 and 75. It is said that the genetic deletion is responsible for a loss of about 35 points on this test. Not that I am a big fan of figures, but still, this is what science books say. Imagine my surprise when I was told that our little girl scored 106 on the overall test and 111 on the non-verbal test (matching, logic, etc.). This is pretty amazing…just like my child! When I told my husband her scores over the phone, he made me repeat them. This is one of the happiest days of our lives.

What makes her scores even more amazing is that the test was conducted in English. My husband and I are native French speakers, and we speak French at home. Mila has only been speaking English for about six months.

I can’t believe she’s doing so well. I was actually in the room for part of the testing, and I couldn’t believe what she could actually do. So, in a nutshell, as the psychologist would say, “I don’t know what you do with her…but it pays off, so keep on doing it.” And we will—her individualized NACD program!!!!!!

I know she’s doing so well because of NACD.