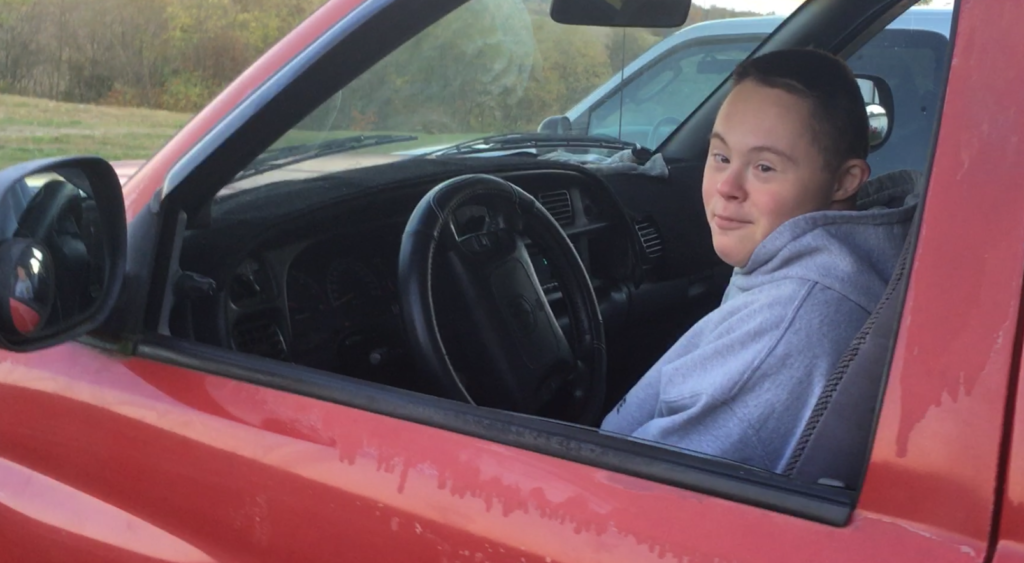 Isaac is a young man who we are very proud of, as we are of his mom and dad who have done such a great job with him. Isaac started with us ten years ago when he was seven. In the past ten years we have had the privilege of working with Isaac’s parents to help him along the way toward becoming an adult, a contributing, happy, functioning adult.

Born with Down syndrome, Isaac had more challenges than most children with his diagnosis. Of particular concern was the difficult combination of significant hearing issues, coupled with severe oral motor issues. Everything associated with language has been extremely difficult for Isaac, but because of his perseverance and that of his parents, he has come a long way and is now intelligible and using full sentences to communicate.

Over the past years Isaac’s parents understood the whole picture and have been focused on helping Isaac become a very functional, highly capable individual/adult. Chores have been part of Isaac’s life and as such he has learned to be responsible and independent. At seventeen he is not only significantly more highly capable than most of his “typical” peers, but he understands work, service, and contribution much more than most and, frankly, more than many ever will.

On a daily basis Isaac is a happy, active, motivated participant in his NACD program and in addition assumes many responsibilities for his family. Isaac not only completes his chores, he assumes responsibility for them and carries them out without the need for any prompting. In addition, as he has become more capable and independent in his work, he initiates adding new things to his list. If he sees something needs doing, he does it.

Isaac has an impressive list of responsibilities, which includes making the family’s beds and turning them down at night. (I don’t know if he leaves mints on the pillows.) He takes care of all aspects of the family laundry, from sorting to washing, drying, folding, hanging, and putting it away, to organizing his closet and drawers. He does the dusting of the house and cleaning and vacuuming of the floors, sets and clears the dinner table, and is taking part in more of the food preparation. He takes care of loading and running the dishwasher and putting everything away, and takes care of the trash, which involves him loading it into his truck and driving up the road for pickup. He also cleans the dog kennels and feeds and waters the barn cats.

Isaac is like the energizer bunny and keeps on going. Outside duties include pool cleaning, splitting wood with a wood splitter (trust me this isn’t something most teens would be doing), loading it into a tractor bucket or his truck bed, and then driving it to the house. From there he loads it into a wheelbarrow and stacks it in the house. He washes and details the cars, cleans and organizes the barn, cleans the tractor after use, and more. Most anything that needs to be done, Isaac is doing it and doing it willingly and with a smile.

Isaac defines “Highly Capable” for me, and as I tell folks, there is always a place for highly capable people. Who wouldn’t want an Isaac around?

I think Isaac has a bright future. He is a delightful young man who approaches life with a smile and who is always looking for a way to contribute and serve. He now has his sight on a working at a local cheese business.

I’m proud and thankful for having the privilege of knowing and in some way contributing to Isaac’s life and future.