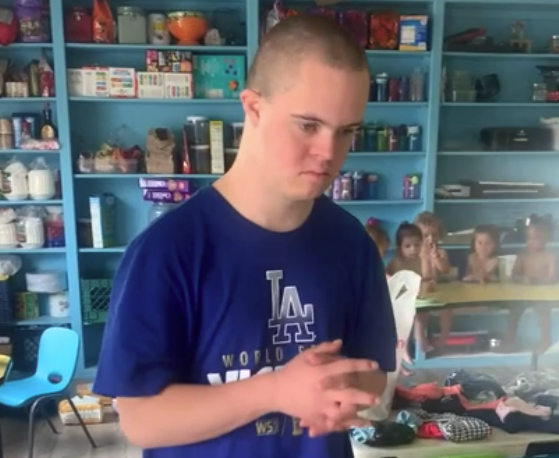 Below is a message from Dawn Zachmann, a superstar mother of a young man with Down syndrome and autism. Dawn is one of our exceptional parents who has taken her role as parent and grandparent very seriously, to the great benefit of her family and others.

Dawn, mother of 5, brought her then five-year-old son David to see me in 2006. David has Down syndrome and had been diagnosed with autism as well. When I first met Dawn and David, I discovered that Dawn’s husband had just recently passed away. Dawn, with five children and now a single mom, impressed me that she was willing to take on NACD home education and bear the responsibility for David almost entirely on her own shoulders. Within the first year on program, her house burned down, and she still carried on, financially supporting her family through childcare and home educating all her children. In 2012, all while home educating her children, she opened “Small Wonders,” a home daycare, and in 2017 opened her now large and successful childcare center.

David’s story is important, not because his story is one of the typical Down syndrome success stories, of which we have many. David is not one of the kids who now as an adult functions independently, drives, and lives a typical life. David’s level of involvement was and is such that he will be living with some issues throughout his life (not really unlike most of us); but David’s story is a success story, an important success story, because David has made and continues to make a significant contribution to his family and community and has made other lives and the world a better place.

Hello, my name is Dawn Zachmann and I want to tell my story of how I meet Bob Doman and how he has helped my son David and in turn how David has touched and influenced so many lives.

I am the mother of 5 children, one of which has Down syndrome and autism. David was born with a heart condition, which later needed surgery. He has had over 30 surgeries and to say that life for us has been quite stressful would be an understatement. I wanted to help David all we could, we all did, and figured preparing him to be as independent as possible is one of the best gifts I could give him. It was actually my brother who told be about NACD. He said he read an article about the program, so I reached out. It was in 2006 when David had his first evaluation. I was so impressed with Bob’s knowledge about brain function and physical development. He evaluated David and said he could help him. It was pretty intense evaluation, but when we left, I felt a sense of relief. I finally found the person who could help David reach his potential.

One thing I love about Bob is that no matter what the scenario I told him about he always had an answer. I know without a doubt he was meant to be in our lives. In just a few days David received his program. It was very easy to understand because everything was explained in detail. Most of the activities take less than a couple of minutes, are performed a number of times per day, five days a week and produce tremendous results. David loved doing his program and my family noticed big improvements in his behavior and intellectual development. He had sensory issues, which causes him in some situations to have temper tantrums and they slowly became less and less.

After David’s 3rd evaluation I decided to enroll two of his brothers in the program. I was homeschooling them and felt NACD would help them have a better love of learning. They didn’t always like doing their schoolwork but as a mom I felt like the program they were on was a good one. Well, I was mistaken. Bob discovered some learning challenges with my son Joshua and designed a specialized program just for him. My other son Jacob is a very self-motivated and he also designed a specialized targeted program just for him. When we received their programs both of my boys were so excited and overjoyed with the fact they didn’t have to spend an hour on math every day and hours on their other subjects as well. Joshua started to love learning because his new program was so doable. Bob told me about neuroplasticity and the importance of frequency, intensity and duration and how vital that children’s education be targeted for the. With targeted input children can learn more in minutes than hours. Jacob would wake up, eat breakfast, do some of his chores and then be ready for his program. Life was so much less stressful, and I didn’t worry about them getting a proper education. The program fit us and made life much more enjoyable. Their memory skills, reading comprehension, math and other academic skills improved a whole school year after just three months and we spent only a third of the time on their new program that we had spent on homeschool previously. I wish I knew about NACD when all my children were younger because I think they would have had more of a love for learning earlier in life.

My one and only daughter also joined NACD and has done very well. Bob has taught all of my children the importance of being self-sufficient. My 15-year-old daughter Abigail runs her own online business and makes more money than some adults. My son Jacob purchased his second home by the age of 23 and Joshua has his own online business and helps me run our very large daycare center. Bob has always been someone my children look up to too. They think he is a pure genius and love that he never makes them feel bad when they make a mistake. He taught them how to be responsible, helpful and to work for things.

In 2020 I enrolled all four of my young grandchildren in NACD. My youngest was 6 months and oldest 8 years. I help them all do program and they all love it. Bob told 8 year old Khloe that if she works hard on her program he can have her graduating from high school in a few years. She is super smart and she and her brother Mason test scores as already much higher than their peers.

Ashton was bow-legged when he started walking and Bob designed a program to help straighten his legs out and now at 18 months he walks normally. My granddaughter Madison has a digit span of 6 and she just turned four, I can’t thank Bob and NACD enough for the gift they have given my family. NACD families get a coach who is always available for any questions or concerns about the program. The staff is always friendly and cheerful. I would highly recommend NACD to anyone with children no matter what their situation is. I know without a doubt Bob can help any child reach their potential.

Reprinted by permission of The NACD Foundation, Volume 34 No.7, 2021 ©NACD