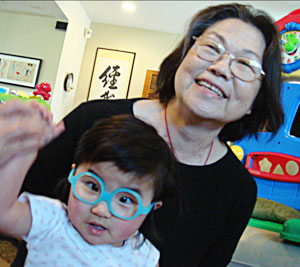 The Chinese toilet-train their children very early. It is an “ancient Chinese secret” that has been handed down from generation to generation for thousands of years. Unfortunately, it has also become a vanishing tradition for modernized city dwellers who are finding disposable diapers much more convenient. But most Chinese in my generation, even my children’s generation, still know about this technique (especially those from rural areas), and many still remember having seen or having worn crotch-less pants while growing up. Indeed, while Western babies go through diapers, training diapers, potty chairs, and then toilets, many Chinese babies go from diapers straight to crotch-less pants with nothing inside at all.

I learned this toilet-training trick from my grandmother, who lived in the country with a big household and an even bigger yard. All the toddlers in my family ran around and played in the yard in crotch-less pants, and just squatted on the ground when the need came. Grandma would clean up after us by sprinkling ashes on the poop and sweeping it away. But before all this, before we could even walk, we were toilet-trained as babies.

The following tips are from my personal experience of potty-training a (much) younger brother, a son and a daughter, and a grand-daughter. They were all born in the States, so I combined the Chinese and American cultures by training them to pee and poop directly into the toilet.

As soon as the baby is strong enough to hold his head up and upper body rigid, which could be just a few months old, he is ready to be potty-trained. Take him to the bathroom and whistle a mono-toned whistle, raising the pitch slightly at the end. If the baby goes, reward him with praises, hugs and kisses.

To encourage bowl-movements, make a two-syllable straining sound like “uh-uh”, with emphasis on the second “uh”. Also reward with lots of positive reinforcement if the baby does poop into the toilet.

Even if the baby does not go, do not pressure or scold him. If nothing happens after a few moments of sitting and whistling (not more than a minute or two), simply end the training and try again later.

I have found that the best time to train a baby to pee in the toilet is when he first wakes up and his bladder is full. Use the “straddle” position for infants: Standing in front of the toilet, remove the baby’s diaper and turn him around so his back is against your stomach. Supporting the baby under his thighs and knees, straddle over the toilet and carefully sit yourself down on the edge of the toilet seat (not too far back or you may fall off, along with the baby).

This position has several advantages: The baby is cradled over the toilet snug and warm, and can be lifted up at anytime to check the contents of the bowl. Also, you can wipe his butt easily by tilting him back to lie on one of your legs, grasping both his legs with one hand, and using the other hand to get toilet paper.

When the baby gets bigger, you may want to adjust the “straddle” position by sitting slightly off center, and turning either to the left or right, so the baby’s feet are not pressed tightly against the raised-up seat cover. Otherwise, he may kick too hard and push you both off the toilet.

Another alternative is to buy a small baby toilet seat that fits over the regular seat. This way, the baby can sit on the toilet facing you while you hold him by the waist or arms to secure him. This method is recommended when the baby becomes too big for the “straddle” position. However, it is not as easy to check the toilet bowl or to wipe the baby’s butt. And the baby cannot turn his head to smile up at you lovingly from just inches away to receive a kiss on the forehead (priceless!)

The best time to train the baby to poop is after he eats, when his stomach is full and his intestines have been working. When the baby needs to poop, there are usually some signs– he may stop eating or playing and seems to concentrate on something. His face may turn red; he may make straining sounds or simply farts. If you whisk the baby to the bathroom at this time, he can probably poop into the toilet.

Try to catch opportunities for training through out the day: If the baby is having or about to have a bowel movement, or during one of the diaper changes, take him to the toilet just to get him used to the routine. The more diligently you do this, the quicker the baby will learn to associate going to the bathroom with the whistle and “uh-uh” sound.

Within a few months, all the babies I had trained in this manner were successfully conditioned to relieve themselves at any toilet, anywhere, even without audio signals. Most amazingly, this training method even worked on my two-year-old granddaughter, who has a neurological disorder (overall delay in her developments). So, although she cannot yet walk or talk, she knows what to do whenever she is held over a toilet. And we no longer need to whistle or say “uh-uh” to her, either.

And that is how the Chinese toilet-train their babies.