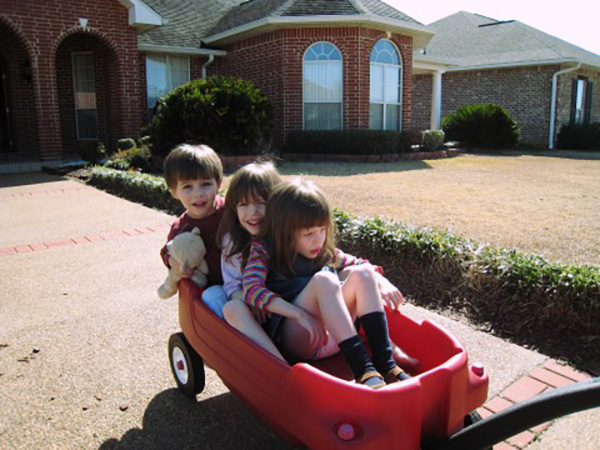 I have three children on the autism spectrum and they have been on NACD’s TDI Targeted Developmental Intervention® for 9 months. I have six-year old twin girls and a son who is now 3 ½.

Hannah and her sister Lauren were born prematurely at 25 weeks. Hannah is legally blind. When we started with NACD she was completely non-verbal with many tantrums. She was constantly stimming (Debilitating Sensory Addictive Behaviors or DSABs) 24/7. She acted as if she didn’t know we existed. She had no comprehension of language or communication. She couldn’t eat solid foods and lived on a liquid diet. At 2 ½ years of age, Hannah wouldn’t let anyone touch her. When she was 3 ½, she started a Pre-K program but made no progress in 1½ years.

Lauren, age 5 ½, had a few words of communication. She often sang in a whiny voice. She could read a few words.

Joseph at age 3, showed very little emotion. He was like a wooden Indian, with no speech, no words. He did not understand any commands or directions. He had some food aversions and would rock (DSAB).

Armed with the individualized programs for each of my children, I got to work. I have been amazed at how helpful NACD’s Therapeutic Video concept has been.

To make the videos, I recruited some relatives, aged 5 and 6 years old, to model one-step directions. I used the Macintosh iMovie technology. With this, I was able to import from the video camera to my computer and edit. I was also able to add music and text. I filmed approximately 50 directions. I ran out of ideas and bought some of the “Fun Decks” from a company called Super Duper Publications. We also incorporated some singing for entertainment and modeling of typical behavior.

There was definitely a learning curve. It took 3 days to create the first 8 minutes of video, but I got a lot better quickly. Eventually I had made a 40-minute video that my children could watch on an iPod.

I also found many videos on You Tube that were helpful. There are many alphabet, phonics, learning to read and skip counting videos that we were able to extract with the Movavi software program and put on our iPod. Do be careful and watch any videos taken from Youtube all the way to the end! There are some videos out there that appear to be for kids, and may begin that way, but are definitely really for adults!

These therapeutic videos and NACD’s program have helped all of my children progress exponentially.

Hannah now seems to be “waking up.” She is aware of the people around her and is aware of what we’re doing. She recently protested when her sister received something that she wanted. She is also eating some solid foods. She seems happier and no longer in such turmoil. She is able to sit in a chair now. We have also just started seeing some “output” from Hannah. She is beginning to follow some one step directions such as touch nose, blow kiss, turn around, arms up, etc. She is still inconsistent, but we know she is understanding more.

Lauren continues to increase in her receptive language and her expressive language. She now reads and understands hundreds of words. She is using speech more and beginning to show some creativity. She recently asked, “Can I have brown yogurt please?” when she wanted chocolate pudding.

Joseph, who 9 months ago did not understand his surroundings and gave no verbal output, now follows more than 30 directions and is expressing spontaneous thoughts. He has brought me broken toys, saying, “Fix it” and recently said, “I swim” in the bathtub. He is reading probably 200+ words now. Today when going through his words cards, he said “big” for the word “large”! We were shocked at his understanding.

As of our last evaluation I decided to actually make a “weekly” therapeutic video that would consist of everything on their program that could possibly be put in video format. Since we have three kids on the program and they learn so well from this method, I felt more time could be spent on “processing” activities and less time actually flipping through word and picture cards. So far, this has proven to be an extremely effective method of teaching them. For this week, I made a 15-minute video that had their 20 new sight words, 16 unit pictures (types of flowers), language picture cards, review word cards from previous weeks, and review unit picture cards. We have had unbelievable progress! In the midst of Hurricane Gustav, we did not get much of their program done, but they did watch their therapeutic video in the morning, right before nap time and at bed time for 3 days. Today, for the first time this week, we actually went through the word and picture unit cards with them and Lauren knew all 20 of the word cards and 14/16 of the picture cards! Joseph knew 10/20 word cards and 13/16 picture cards! Hannah is not giving us much output right now, but she is certainly getting lots of input!

Of course there is a lot of time up front put into the making of these videos, but there is no doubt it is worth the effort. Right now my biggest problem is that the kids are learning the material faster than I can create the videos!

I am blown away by their progress and hope that telling others about my experiences will help them with their programs as well.