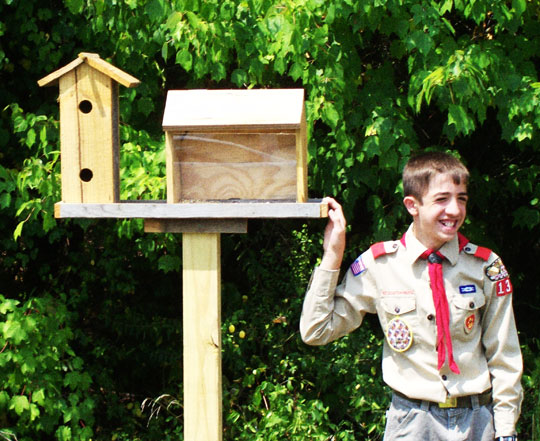 When Ammon was born he had oxygen problems that weren’t detected until he was six weeks old. When he was three, the Sparks Clinic in Birmingham evaluated him and they said he was “mentally retarded.” When he was about five, we discovered that he had a hearing loss. We were told that he would never learn to read.

However, his kindergarten teacher worked with him and helped him to read. His first grade teacher saw that he was bright and encouraged us to have him tested for a gifted program. He got into the program, but the teachers had difficulty dealing with his special needs.

By the time he was in fourth grade, he would receive report cards with straight As, but at the bottom it would say, “accommodations made.” I was frustrated because I was seeing holes and gaps in his knowledge and abilities. The teachers were working with him, but I felt that they never knew which style of teaching was effective. The head of the Special Education Department told me that Ammon didn’t need to graduate at 18, he could graduate at 21. This was the straw that broke the camel’s back for me. I knew that they were planning to make accommodations for him until he graduated.

My sister in law had three children on the NACD program, so I brought Ammon to them. I was so impressed. When I had worked with the school program, it felt as if it was trial and error, but at our initial visit, Bob had Ammon pegged within 2 hours. I left our meeting and knew that NACD knew exactly what they were dealing with.

I finally had the tools to work with him. It was invigorating to me, and I was willing to do anything. His program empowered me.

At this time, the Special Ed Department at the school offered some stuff on the side with Ammon, like trumpet lessons and some software. The school counselor sat down with us and said “We can’t do what you’re doing – the daily occupational therapy.” The counselor was so impressed with his NACD program.

When Ammon was initially evaluated by NACD, he was below grade level. In six months, he had made tons of progress and was pulling up. Now, he’s way above grade level academically. He scored a 10.1 in Math. (Ammon is 13 years old)

Before, when he had writing assignments, he would just sit there and look at it, not writing anything. Now he can write creative stories. He reads for fun. He is currently reading I, Robot by Isaac Asimov.

Initially Ammon had some autism issues, he’s more well rounded now. He’s come out of himself. He’s more social, more involved, and talks more with others. His scout leader, who has known him since he was 11, recently said that Ammon was a different kid, now. He’s comfortable with the other boys.

Ammon still wears hearing aids. He still has baseline hearing loss. He has deformed ear canals. However, he recently went for a regular hearing test and the technician said, “his hearing has improved.” I believe he is able to focus and tune-in better now. He can process auditory information better. His senses have sharpened.

I am so grateful that NACD gave me the tools to work with Ammon. In the beginning, I couldn’t see what the end results would be, but as I went in every 3 months, I would see the dramatic progress made, and it was encouraging. Now our goal is to get him through high school and have him spend his senior year at a junior college. That wasn’t even conceivable three years ago.