Home / Newsletter Articles / Happy Holidays (And Do I Have a Gift for You…..and Me!) 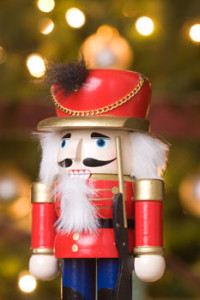 At the moment I’m on a flight from Salt Lake City to Orlando. It’s December 12th, and I seem to have lost a week someplace.  I’ll be in Orlando for the week, and then it’s Christmas week.  I thought I had another week in there to get my shopping done, put up some decorations, and stock up on food.  Oh, well–thank goodness our brains permit multitasking.

I tend to take short naps when I get on planes, and during these naps my brain tends to address issues, problem solve, and come up with some new questions and often some good thoughts and ideas.  Often I wake from such naps with really earth-shattering revelations, such as,  “I forgot to pack socks.”  I marvel at the ability of my brain to review the packing I had done at 5 AM and wonder why it waited until I was on the plane and could do nothing about socks to bring this vital piece of information to my attention. But such earth-shattering thoughts are beyond my conscious control.  My just-completed nap has fortunately produced some thoughts that are far more significant than my socks, which I believe I did remember to pack this morning.

There are a number of really good things that are happening right now.  The economy is not one of them, nor is the financial situation for many of our families or for our organization.  But most of our kids and adults on program are doing well, and some are doing fantastically well.  I have marveled throughout my 40-plus years of doing this work at how much impact we can make on the human brain and how dramatically we can affect lives. Our new TSI: Focused Attention program has been completed, and we are seeing really great results from it; and it looks like the programmers are finally going to get our new Simply Smarter System completed.

Way back when, when I was young and was able to work seven days a week and sleep three hours a night and saw my first kids at 8 AM and finished my last at ten or eleven, I did a seminar at our then-chapter in New Jersey.  There was a reporter there from the Philadelphia Inquire.  This reporter had spent the day with me, observed some evaluations, and attended the seminar I did that night.  This was perhaps my favorite reporter ever.  She began the article that was published in the paper with, “Bob Doman, standing well over six feet tall, handsome and charismatic….”  I forget the rest, but at 63 what does that matter? We savor those few such morsels life throws at us.  But what really stands out about that reporter and her interviews with me was a simple question that she asked, one that I had never slowed down long enough to ask myself.  What she asked was, “Why do you do it? Why do you travel nonstop, work seven days a week, and 18 to 20 hours a day?”  As amazing as it sounds in retrospect, I had not ever asked myself that question.  I gave the question about a half second of thought and came up with the real answer.  What I told her was that most people I had known in my life had never done anything significant to really change their lives, and that I had the opportunity many times every day to significantly, and often dramatically, change a life.  If you can do that, then how can you not?  She then asked me what my goal was, and I answered, “To change the world.”

“To change the world” has always been the goal.   I have always conceived of a new enlightenment.  The Enlightenment of the 18th Century, the advent of the Age of Reason, produced intellectual, scientific, and cultural change and helped pull the world out of the Dark Ages. Part of the change initiated and produced from the Enlightenment was an understanding that people could change society and their own lives.  The Enlightenment opened the gates to a perception that you can move up, you can move forward, you can achieve more.  My perception has been that if we address our individual neurological inefficiencies, we can change our function, move up, move forward, and achieve more.

I was a kid who struggled through school. I was an embarrassment to my family and myself.  Let me tell you a little story to vividly illustrate how truly significant this was and to sum up my childhood and school experience:

At the age of forty-four, while traveling and seeing kids, I suffered a heart attack. It turned out that I had four blocked arteries and needed a quadruple bypass.  At forty-four this was really inconvenient!  The hospital was really backed up, and they told me that it would be a week to 10 days before they could do the surgery. So here I was, unable to move, getting further and further behind in my schedule, in a dirty old hospital in New Jersey, with few people speaking English (at least any English that I could understand).  Lying there like that for a week really wouldn’t work for me, so I faked another heart attack.  I don’t believe I could get away with that today, but back then the technology wasn’t so great.  To make a long story short, they added me to the end of the schedule the next day.  Surgery was at 5 PM, and I was evidently supposed to be out/drugged until the next morning.  Well, they brought my family in to see me (not a pretty sight evidently, with tubes coming and going everywhere), and they said, “Hi,” which started the process of waking me up.  I woke up about 8 PM, not the planned AM.  As I was coming out of the anesthesia I realized that as far as outcomes go, I was still here and in a recovery room with a number of other “bodies” that didn’t move and that a party was going on with the nurses and whomever else was in that place.  I had this big garden hose going down my throat and was gagging and really, really uncomfortable.  Feeling very much alive, but feeling that my tentative life was being seriously threatened by the thing strangling me, I did my best thrashing and banging “Hey, I’m dying over here” attention-getting behavior, which resulted in nothing for what seemed like an eternity. Suddenly this really unpleasant (I’m trying to be kind)-looking male nurse appears over me.  (They should reserve all such positions for young angelic-looking female nurses.)  I’m sure I did a great job of indicating through gesture and grimace and around-the-tube desperate noises that I was really freaking out.  The individual peering down at me responded with the reassuring words, “I’m nurse Max, and if you try to pull that tube out, I’m going to strap you down.  When the doctor comes in tomorrow morning, we will take it out.”  In the morning! My entire being wanted to scream out that I couldn’t endure this thing for another two seconds. Morning?!  One thought (plus some self-hypnosis that I had learned) got me through the night: If I could survive school, I could survive this.  (As a P.S., after it was all over and done they told me I had about three years to live if I retired- fat chance! That was 19 years ago.)

The point of this story is that as a kid I had really serious learning issues–not a cool thing for the son of a doctor. The first program I ever wrote was mine. It turned my life around. I had learning problems, but I wasn’t dumb. If I had accepted who the world said I was, I would never had been anything significant, nor would have thousands of others whom I’ve been fortunate enough to help.  The New Enlightenment– We can be more.  Neither our parents nor our schools had or have much of a clue as to how to help us realize our innate potentials.  Today we have the knowledge to help virtually everyone do better, often much better.  Our function today is not a reflection of our innate potential, but of the opportunities that we have received.

I beg your forgiveness. You have been patient in tolerating my verbosity. It’s been a long flight.  I know you have been waiting to hear about the gift.

Changing the world doesn’t just mean helping our kids with issues overcome their problems. It means helping us all perceive and strive toward achieving our potentials.  I have always wanted our NACD families to get that picture, and a few have. In its 30 years NACD has achieved a bit of a tipping point.  There have been dramatic changes over these thirty years, not the least of which is that the “experts” now acknowledge there is this thing called neuro-plasticity.  The vast majority of experts, however, still don’t understand something that almost all NACD families not only understand, but have actually helped change in their children: processing.  To help move things along, I need more “typical” children to become exceptional.  I also need more “typical” adults– you moms and dads–to start reaching higher to achieve your innate potentials.  The example of a few can have a huge impact on the perceptions of the masses.

So, here it is, the gift I promised.

Beginning January 1, 2011 we will be eliminating the initial fee for new family members and lowering the evaluation fee for all additional family members, Mom, Dad, and sister Susie, to $250.  Come once, come every three months, every six months, once a year, but come.  Let’s raise the bar! Let’s all do better in 2011.  I’m not holding my breath thinking that things are going to be getting a whole lot better in the country or the world real soon. I doubt things are going to get easier, but I would bet that everything is going to be more competitive.  Find out something about yourselves, find out how to function better.  Mom and Dad, you might be able to do better helping your kids, better with your jobs and your spouses.  With your typical kids, talk about a little bit going a long way! Just increasing processing, turning your children into readers, and getting your kids to the top of the class rather than the mediocre middle, can change their lives.
Okay- 2011- let’s change the world!