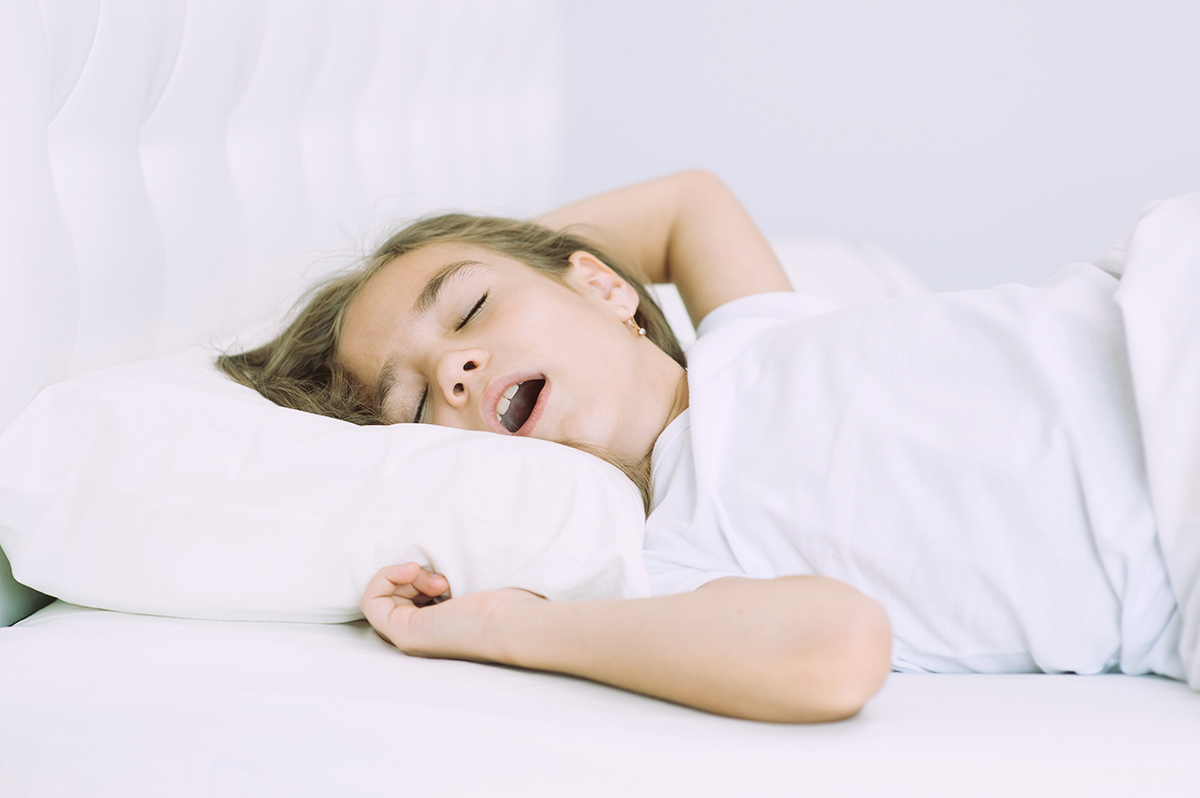 Sleep is so important to our health, healing, and learning processes. It affects the way we feel during the day and most aspects of how we function. Our sleep can be compromised or interrupted for a number of reasons. One of the big factors contributing to sleep problems is related to breathing. Breathing problems at night range from things we think of as normal, such as snoring, to a range of other breathing problems. Children have many more problems with breathing at night then we might think. Children have smaller anatomical structures than larger people, so it is easier for them to have breathing obstructions and reduced breathing or blocked breathing for periods of time.

Let’s look at these problems and see them for what they really are. Snoring in children is not uncommon and not often thought of as something needing treatment. When they snore it is often thought of as cute. However if the snoring is very loud, there are probably three things happening. First, they are undoubtedly mouth breathing, leaving them dried out and obstructing airflow to some degree. Second, the noise of snoring tends to keep the brain from going into a deeply restorative sleep. It would be like any other sound in the room. Watching it on brain wave equipment, one can easily observe that it keeps the brain from going in deep realms of restorative sleep. And third, the body is using more oxygen just to breathe a little harder, while at the same time possibly limiting or obstructing airflow enough to create low oxygen levels in the blood. That means less oxygen to the brain. The American Academy of Pediatrics recommends evaluating all children that snore.

There is one more form of apnea that is far less common. It is usually uncovered when the obstructive component of sleep apnea is resolved. It is an absence of breathing that occurs for reasons other than obstruction. Basically the brain fails to continue the breathing commands when we are asleep. Because this form of apnea is related to the central nervous system, it is referred to as central sleep apnea. For the purposes of this article, we use the term “sleep apnea” to refer to obstructive sleep apnea.

There are some features of air flow obstruction that can be addressed with oral or dental appliances. Dentists have a part to play in resolving issues that create airflow obstructions by assessing oral structures, jaw positions, oral cavity formation, and tongue positioning. After a dental assessment the dentist may provide different appliances that keep the jaw forward or expand the hard palate. There are many different appliances that can be used for positioning, correction, and resolution of snoring and airflow problems. This not only addresses the immediate problem, but can correct structural problems as the child grows, as well as facilitate air flow, eating functions, and proper facial structure.

Some of the features of children who tend to be predisposed to sleep apnea include: small jaws, large tongues, obesity, structural characteristics related to Down syndrome, enlarged tonsils or adenoids, nasal septum deviations, allergies and sinus problems that are chronic, and general low muscle tone.

Symptoms of sleep apnea include: snoring, irritability, daytime sleepiness, morning headaches, hyperactivity, poor cognitive performance, poor school performance, weight gain due to metabolic sluggishness from low oxygen, sleep that is not refreshing, and feeling tired all the time. These are symptoms you can report to your doctor.

There are many ways to treat sleep apneas. The resolution for each child is different and will be managed by your doctor. The treatments range from using a positive pressure device, called a CPAP machine, to removal of tonsils or adenoids if they are a problem, and weight loss. The benefits from the treatment of sleep apnea include better cognitive function, feeling less tired and irritable, better metabolism, increase in physically restorative sleep, and greater immune system function for better overall health. The treatment plan will vary from doctor to doctor and will be different for each child. Treating sleep apnea will help avoid other health issues such as diabetes, heart disease, obesity, and high blood pressure.