This study was conducted by The National Association for Child Development (NACD) during the 2011/2012 school year within a public elementary school in Northern Utah. With the approval of the principal the program was implemented by one of the teachers, who had the target classroom implement the Simply Smarter program. The program was used for a short period, beginning in January 2012 and continuing until mid-May 2012. Despite the short period of the study, results showed improvement in the individual students’ sequential processing levels, or digit spans, reflecting improvement in short-term and working memory. There was also a relationship between digit spans and academic scores.

The public elementary K-6 grade school in which this study was conducted is considered an “inner-city” school and had the following demographics, as of 2009: More than 80% of the student population is considered a minority. More than 80% of the student population is on a reduced or free lunch program. In addition most students in this school speak English as a second language and come from disadvantaged homes.

The target classroom was an upper grade elementary class. A total of 22 students participated in this school study. As stated the study was initiated at the beginning of January 2012. The children participated in the online program daily from the beginning of January through the first two weeks of May. The teacher provided a reinforcement program for improvement in scores for each student.

Looking at the target class overall, there were statistically significant gains in the students’ digit span scores from January through May. In the four main Simply Smarter activities that all students participated in, the improvements were as follows:

As can be seen, the improvements in digit span scores of the students in the school study far surpassed what would be expected just from the passage of time and normal maturation. 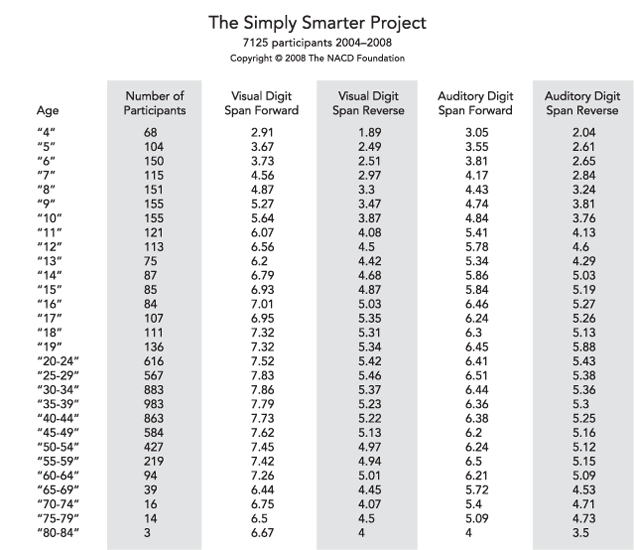 *Note: The students received minimal science instruction in the classroom during this period of time.

The Simply Smarter Program was used by a public school classroom located in an underprivileged community in Northern Utah from January through mid-May of 2012.

The results of the study suggest that the Simply Smarter Program can be an effective tool for increasing short-term and working memory and may be used to increase reading and math scores.