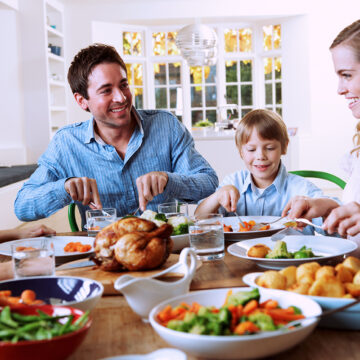 by Bob Doman “All great change in America starts at the dinner table.”  — Ronald Reagan   If your children are infants, toddlers, of school age, or adults, or somewhere in between, family meals can be incredibly important. Whether our motivation is teaching a skill (such as eating or participating in meal preparation) or fostering family dynamics (such as communicating … Read More

BREASTFEEDING Before an infant is born it lives on the mother’s blood, which circulates through the fetus. Upon birth it lives on mother’s milk. An infant is given its start solely through the mother. The vital beginning for bones, organs and glands lies in the health of the mother during and after pregnancy as well as many years before conception. … Read More

By Sally Fallon, Mary Enig PhD, and Michael Fitzpatrick Soy formula, which contains phytoestrogens, genistein and daidzein (also called isoflavones), is given to approximately 25% of those US children fed formula. It is estimated that an infant exclusively fed soy formula receives the estrogenic equivalent of at least five birth control pills per day. By contrast, almost no phytoestrogens have … Read More