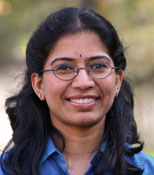 Vidya Guhan is a Speech Language Pathologist by profession. She graduated with honors from the University of Wisconsin at Madison where she studied under top researchers in the field and won many awards in both her undergraduate and graduate studies. For her Fellowship year of supervised practice she worked first with brain-injured children in a residential rehabilitation center, then with geriatric patients in a hospital setting.

After graduating, Vidya moved to California and worked in public schools for several years as a Speech Pathologist and Special Education teacher for students with autism, speech delays, ADHD, and other special needs. The more experience she gained in her profession, the more she felt frustrated by the discrepancies between what she had learned in her training and the realities she faced in practice. “I had studied under some of the best people in the field, but there was very little information on what was really going on in the brain. We were treating voice as voice, articulation as articulation, language as language—but none of what we were doing was stimulating the brain to fix the problem. My colleagues and clients were happy with my work, but I didn’t feel I was doing enough for these children.”

Things changed dramatically for Vidya with the birth of her daughter, Lavanya. Suffering from eczema, allergies and colic from birth, the baby barely slept and required Vidya’s constant attention. By age one, lavanya was having hundreds of seizures a day, and delays in her development were becoming apparent. Vidya discontinued working and devoted herself to helping Lavanya thrive and succeed. She worked with Lavanya throughout each day, using activities based on her own training and on the early intervention therapies Lavanya was receiving from traditional Occupational, Physical and Speech therapists. Despite all of these efforts, annual testing at 3 years of age showed that Lavanya had made no gains between the ages of 2 and 3. “Zero!” Vidya says. “Nothing had changed. I started thinking something’s wrong with this picture.”

Then Vidya learned about the National Association for Child Development (NACD) and had Lavanya evaluated by Bob Doman. Vidya began NACD’s intensive, individualized home program with Lavanya, and within weeks saw remarkable, documented results. “The transition team had tested her, then the school tested her a month later. Within one month of starting the NACD program, Lavanya made a six-month jump in fine motor skills,” Vidya recalls. And the changes kept coming. “During her second quarter on the NACD program, we took Lavanya’s +5 prescription glasses off (which she hasn’t worn since) and got rid of her orthotics.” Vidya was so impressed she decided to become trained in NACD’s unique neurodevelopmental approach. She started working for NACD in California and eventually moved her family to Utah to work out of the home office and continue training under Bob Doman.

Currently, Vidya conducts evaluations and provides parent support locally in Ogden, Utah, as well as in New Delhi, India. Vidya was instrumental in starting NACD’s first international chapter in India in the fall of 2005. She is also the project director for development of new NACD software. In between working for NACD and tending to her own family, Vidya makes time for her other passion, Indian classical dance. “Dancing is my way of relieving stress and maintaining spiritual balance,” Vidya says.

Her daughter, Lavanya, continues on NACD program and has excelled in her development. Now ten years old, Lavanya is academically advanced for her age, testing at 6-7th grade level in reading and math. She homeschools and goes to mainstream fourth grade part time with her age appropriate peers. She is also part of the school chorus, and enjoys martial arts, piano, swimming and theater.

Grateful for the difference NACD has made for her daughter, and for the opportunity to share the NACD approach with other families around the world, Vidya says, “There is no way I could go back to doing traditional speech therapy knowing what I know now. I have learned that you have to look at the whole child, identify underlying causes of problems, and design a very specific, individualized program for that unique child. At NACD we empower parents to help their own children and give them the chance to see their children make progress. To me, that is the most important thing and I feel very fortunate to be able to do this.”