Home / TESTIMONIALS / We Named Him Rohan

by Santhi Bhupatiraju, as told to Iliana Clift 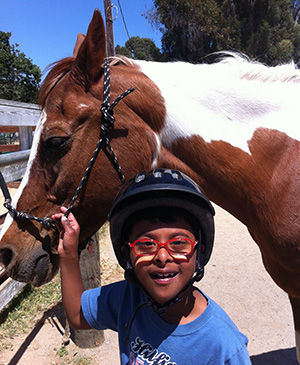 The shock of the diagnosis was so great that I needed several warm blankets to calm my shivering body. Still waking up from the anesthesia and exhausted from hours of unproductive labor prior to the surgery, I wanted to know about the baby. My husband had begged to tell me the news himself, yet the neonatologist insisted on following protocol. She said the baby had turned blue after delivery and was quickly whisked away to the NICU. In the organized chaos of the recovery room, our world collapsed, crushed to pieces, with the soft cry of a newborn child. Down syndrome.

The neonatologist was all business. She straightaway told us that our son would not be like other, normal children and rattled a long list of things this child would never do and mentioned nothing about what he could do. NICU staff bombarded us with a ton of social services paperwork, and then told us our options—we could put the baby up for adoption or place him in an institution. This was our son and we couldn’t give him up. Instead, we named him Rohan, which in Sanskrit means, “ascending, healing, and rising to higher levels or degrees.” We desperately wanted our precious child to rise above his diagnosis, and we were willing to do everything possible to help him.

At first, I was not ready to do much but tend to the baby and cry. I cried a lot and mourned for the loss of the child we didn’t have. While it took me a while to become strong and accept our new reality, my husband was busy researching therapies and talking with other parents of children with Down syndrome. Since we received no encouragement from the medical professionals, my husband began looking for true support networks almost immediately.

We heard about the NACD through an Indian support group when Rohan was a few months old; and even though we didn’t know for sure the method would work, we were willing to try it. After having heard only negatives from other professionals, our first meeting with Bob gave us tremendous hope. Finally someone not only understood our fears, but presented a plan of helping Rohan and put us in contact with others who had walked the same path. Bob told us to just give input, input, input. “Don’t expect anything from him yet. Forget the label and do the work.” Reading about the experience of a child with Down syndrome whose mom had created a website detailing their NACD journey was also encouraging, as it gave a face to the possibilities we were hoping to achieve.

The first four months were extremely difficult. Emotionally, I was still in a bad place and applying the NACD program was physically draining on me. But then, after Rohan’s second evaluation, I began to see undeniable results which energized and motivated me to keep on going with the program.
Despite the fact that Rohan was plagued with many serious health problems associated with Down syndrome, just before he was a year old, Rohan began rolling over and with each passing day we saw new and thrilling developments. It was such a pleasure watching him move through the typical development stages of crawling, then creeping, and by the time he was two-years-old, Rohan started walking on his own.

Along with his physical growth, Rohan was also progressing intellectually at a remarkable rate. He would become visibly excited over picture books and flash cards. His sweet little eyes would light up with joy when we worked with him, and we knew he was engaged and learning. He could read 300 words by the time he was 2 ½, his speech was coming along well, and I was truly fired up to keep implementing the program. Rohan’s focus during NACD activities was marvelous and though the work was hard on me since I was the only one carrying out the program, seeing progress was exhilarating and reassuring. Having friends and relatives remark that Rohan was more advanced than other children with Down syndrome, as well as many typical children his age, was also fueling my persistence with the program. Finally, when Rohan’s pediatrician and ophthalmologist observed that Rohan was developing on par with children without labels and were curious about the program we were following, I felt vindicated. All of this was so rewarding that I was motivated to complete 100% of the assigned NACD program pieces.

When Rohan was 3 ½, we decided to try a special education pre-school, but he was so far ahead developmentally and academically compared to the other children in his group that we soon transferred him to a regular private pre-school and continued implementing the NACD program at home. I liked having a little break a couple of hours each week to rest and refocus so I could continue to work with Rohan.

Rohan, now 10 years old, just finished the 5th grade. After completing K through 3rd grade at home, for the last two years he has been attending a small private school with high academic standards. We are pleased that the NACD program has provided Rohan with the skills necessary to be entirely independent in a classroom with typical children. He not only performs at grade level in all subjects, but has good focus, enjoys school, and is loved by his teachers–not because of his diagnosis, but because of the person that he is. As a result of the NACD cognitive activities, he has the capacity to be a friend and participates in age-appropriate activities. At home, Rohan is a big help. He carries out household chores efficiently and without much prodding – most of the time. Like all children, he knows how to get what he wants but is generally obedient and pleasant. In addition to English, he comprehends Telugu, our native language, very well and can speak it a little, which is pleasing to his grandparents and other relatives in India. It is gratifying to see him participating fully in family religious rituals, enjoying singing and listening to Indian classical music, and developing into a thoughtful, conscious spiritual being.

Although we are only able to complete about 60% of program activities when school is in session, growth, though at a reduced rate, is still taking place. Teachers at the school are great, but they are not interested in or able to push our son to reach new levels of ability. This is why, while school provides an excellent social environment for Rohan, we consider his NACD program the real tool that drives Rohan’s academic development. The program addresses his unique needs in an individualized and developmentally appropriate way which is also fun and effective. We are grateful for the NACD assistance with our child’s education.

When Rohan was born, the medical professionals made sure we knew of the hardships his diagnosis would bring, and despite their suggestion to perhaps put him aside, we chose to love him and do the best we can for him. Now, with the steady guidance of the NACD, we know that Rohan, practically unhampered by his genetic makeup, will grow up to do whatever his mind desires, be it higher learning, volunteer work blessing others, or even taking care of us in our old age. Because of the NACD, Rohan is living up to his lovely name. He is ascending beyond the limitations of the Down syndrome label, healing our broken hearts, and rising to much higher levels of ability than we ever imagined possible those first few days in the hospital. Now, with the NACD, our world is not only complete; it is beautiful.