Siblings of NACD Special Needs Children: The Game Where Everyone Wins - NACD International | The National Association for Child Development 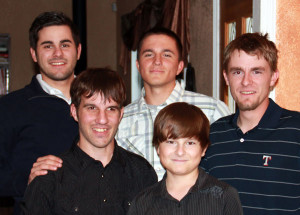 At our recent staff training/brainstorming session last October, it was time to talk about articles for upcoming newsletters. I personally like to contribute in January because it fits right in to New Year’s resolutions, setting priorities, and making plans. Over the years I have actually written articles that touch on some of the key components of this current topic, but not from this angle. In fact, even though our family has been involved with NACD for over eighteen years now, I don’t think I could have actually written this one prior to now. It hasn’t been until recent years, maybe even recent months, that I can honestly say that what I believed to be true all so many years ago has played out in real life. This article will touch on why we started and have continued with NACD for almost two decades; it will talk about how to accomplish more by having siblings do activities (cheap labor); and it will touch on the fact that non-hurt/neuro-typical kids can gain function exponentially by having their own programs as well. What I want to focus on, though, is beyond efficiency, beyond the hurt child gaining additional function, and beyond making good use of time via sibling assistance. It is actually directed at what I believe to be the greatest impact that having a hurt child, more specifically an NACD hurt child, has had on the lives and the development of character in his siblings. It is about the fruits of all those hours spent with their brother helping him to accomplish the impossible.

When we first started on NACD, our son had been receiving the very best of what traditional therapies had to offer, and yet we saw much greater gains in only 3 months of his individualized program than we had seen in years with various therapists and specialists. Our original prognosis for Evan was grim. Walking—probably not. Talking—very unlikely. Seeing—well, there just wasn’t enough of the occipital region of the brain left undamaged. While Evan had begun walking prior to our initial evaluation, structurally it was not a good walk. Language was considered a handful of approximations for a very limited number of anticipated/rote words. Seeing—was just a dream. Within a short period of time on program he was talking more, walking better, and his brain was beginning to understand how to process some visual information. At the time, Evan was 5. Philip was 6. Kenny was 4. Mom was tired. We had a long program to accomplish each day but fortunate for me, the other two brothers were young enough to believe the old Tom Sawyer white picket fence routine. I made it look fun enough to hand over the pleoptic flashlight for several rounds a day to brothers. Very quickly they starting joining in on more and more, and within a few years they were experts at the implementation of Evan’s program and, in fact, did a higher percentage of it than I did. I learned how to use the different temperaments of the brothers in order to decide who did which activities. They greatly enjoyed coming to Evan’s evaluations so that they could hear Bob say they were doing a good job with their brother. More than anything, they learned that hard work (when it is the right work) accomplishes what some people would give up hoping for. I can honestly say that my boys have never looked at a task and said, or probably even thought, “This is too hard.” They know that they were a big part of helping their brother do things that doctors said were not possible. I attribute the fact that at the ages of 24 and 22, Philip and Kenneth are decades ahead of their peers in their careers due to what they learned all those years ago with the pleoptic flashlight, the digit span cards, and all the other tools of our trade. They started to understand that once a good plan is established and worked on, success only takes a little bit of time and lot of determination. As Philip and Kenneth grew and became busier, I was fortunate to seem to have a supply of additional program implementers. Jason was born when Evan was 6, and Grant came along 4 year after that. I am not sure we even “taught” them how to step in and do program activities with their brother or how to assist in any way. By this time program was so much a part of our lives that it would have been like having to “teach” them to eat. It just happened because that is what we do.

While one would think that having a brain-injured child is very difficult on a family, the reality is that meeting the needs of each of the children in the family is the more difficult task. I had decided to homeschool at least through the early grades when they were young. Truth is, I am selfish with my children and I enjoy them immensely. In fact, when they have each entered public education at the High School level I cry like a baby the first morning that I drop them off. Since we did decide to homeschool and since we still had a fairly long program for Evan, it only made sense to utilize the same mentality with the non-injured brains as the injured one.
Accelerate processing skills. Input gets output. Establish a positive learning environment. Guess what? These things work like a charm with a fraction of the time or money that anything else could have. We had regular evaluations and utilized NACD for accelerated cognitive development as well as their educational needs, and each son has entered school with huge advantages over their peers. While I am a proponent for homeschooling given the right circumstances, as an evaluator I know that it is not always the best choice for each individual child. I have a large number of clients with siblings who are seen that attend private and public schools. With these children the key is using the time available to hit the processing pieces that create a critical mass effect on cognitive skills. Just think, 15-20 minutes a day on an individualized program truthfully reduces hundreds of hours struggling, fussing, and crying over homework. When learning is easier, everything else falls into place. If you haven’t already begun to place siblings on program in order to get their neuro-developmental needs accelerated, I would highly recommend it. On top of helping them achieve, it also sends them the message that they are important and that their needs are just as big to you and the “special needs child.”

I won’t go in to detail on how important planning and scheduling is. The only word that I will say about it is “gargantuan.” If you want to be motivated in the area of time management skills, read and reread and reread Bob’s recent article on it. Without good scheduling and management of time, my ship would have sunk years ago. As a mom, I work, I homeschool, I chauffer, I cheer them on in sports, and I check up on where they tell me they are and what they are doing on a regular basis (insurance). Without planning, the vast majority of the things I am responsible for would fall by the wayside.

I have had families ask if they think the sibling might someday resent having to make sacrifices due to the hurt child or the child who struggles. While the right answer has always come out of my mouth, I confess to having some fears along these lines in years past. I tell you this, though, not one of my sons today has anything but good things to say about their brother, Evan. One of my favorite stories took place several years ago when they were all in the van with me on a daytrip. One of the younger boys started talking about someday when he grew up. He threw in that he would have a garage apartment in his home for Evan to live in so that he could help with his children. Then an amazing conversation started to take place with the boys. First to jump in was my oldest who explained that he was the oldest and therefore got first pick. Then the next in line started to argue that he has been just as much a part of Evan’s success and care and that he had every intention of having Evan in his home some day. As they all started to argue back and forth over “who would GET Evan,” I calmly asked, “Evan, who do you think you might want to live with when Mom cannot be here?” Without missing a beat his answer was, “preferably my wife and children.” I convey this story as a testimony that the time that my boys have spent assisting their brother and basically building his brain has created a bond that is far beyond what most brothers go through. For many families the biggest fear is what will happen to their special needs child when they are gone. For me that fear is more along the lines that I hope they don’t come to blows deciding who takes the lead in responsibility for everybody’s favorite brother.

I sum up this article encouraging you to consider involving the siblings to play a big part in the implementation of program activities. Do not see it as a sacrifice that they have to make; it is a blessing that you are bestowing on them and their futures. Just last week Jason said to me, “Mom, I don’t think any of us would be nearly as successful in the things we do if we didn’t have Evan.” He is so right. I have to ask myself, “Is Evan where he is today because of them, or are they where they are today because of Evan?”