Our Journey - NACD International | The National Association for Child Development 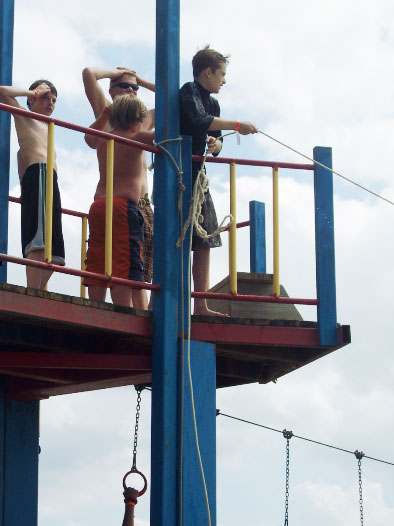 Go back with me four to five years ago. My son had many fears and anxieties. Most revolved around loud noises or social expectations. He could not enter a room full of people. He would not flush a toilet or use a sink that he didn’t know because these might make unexpected loud noises. He could not enter a movie theater that had already started the previews. If he was there early, he could watch a movie, but only with his fingers in his ears the whole time. He was extremely uncomfortable in his own skin. At home, he avoided the neighborhood children. If his sister brought them home, he ran screaming to a back room yelling, “Make them go away!” Transitions had to be handled with a lot of talk ahead of time about what to expect. If things did not go as he expected, melt downs would enfold. We endured many meltdowns.

Now imagine this child enduring a full day at public school. I was teaching in the public school back then. He would come to my classroom after school, and he would scream for about an hour. I could not calm him. I just had to wait. I would get concerned and sometimes condescending colleagues approaching me about my screaming child. Getting through homework was painful. Everything was too loud for him, the lights, the refrigerator, the air conditioner, etc. Accomplishing chores was just as painful. He started with good intentions, but he’d get lost in his head, and never finish the task. He was always completely distracted. We tried Occupational Therapy, visiting with a counselor, and many medications to no avail.

My husband and I knew something wasn’t right. We desperately wanted to help this child. Under the completely overwhelmed outer shell, we had seen a sweet child that had great potential. It just felt as if we were the only ones that could get glimpses of this sweet little boy. We prayed so hard to God, who loves him even more than we do.

Our prayers were answered in gradual steps. Connor had been begging to home school, and I was preparing to come home to have our third child. I was not sure how I was going to home school this child when we barely made it through homework, but I felt an overwhelming need to try to get a grip on this little life that felt so out of control. We prayed about whether or not to home school. When Brian and I agreed that we should, I prayed that God would show me how, and I reminded myself that God loves him even more than I do.

Right around this time, God brought an old friend back into our lives. We had not seen Amy in 12 years. Connor was going through all sorts of psychological evaluations at the time. We thought we might try home schooling, but the “authorities” advised against it. Amy moved to Austin with her family at this time. Amy has a little boy, her second of four children, that has an autism diagnosis. Amy had been working with an organization called NACD (National Association for Child Development) to help her as she home schooled her child. She and her family came to dinner one night, and she just went on and on about NACD and the differences it had made for Luke. Brian and I felt that this could be the answer to our prayers, so we researched it. It wasn’t long after this that Connor received a diagnosis of Asperger’s Syndrome, a high functioning form of autism.

We chose to use the guidance of NACD, but I was slow about getting rolling with it. After Connor’s first evaluation, they identified his strengths and many ways in which his brain was not working efficiently. They designed a program for him that included academics, as well as many therapies that could make him more comfortable in his own body. I went through a period of stubbornness. The methods of NACD were very different than those I had been taught in teacher education classes. I chose to do it my way, and Connor did not move forward. One day, after becoming so frustrated that I was in tears; I went to God with a humble heart, admitting that I was trying to be in control and it wasn’t working. I felt as if God was telling me that He led me to NACD, so I should trust what they were guiding me to do with my child. At this point, I dove in full force.

NACD had many activities on Connor’s program. Some worked on strengthening his central vision so that his eyes were not drawn to everything in his peripheral vision. Some worked with textures and tastes in his mouth so that he could handle a wider variety of healthy foods. Some worked on helping his over stimulated body to feel things the way it should rather than to feel everything to an extreme. Another part of his program worked on his extreme sound sensitivities. Of course, we also worked on academics, but it was done in short manageable chunks throughout the day rather than long battles through lessons. The short chunks of academics were very efficient at inputting the learning he needed. He learned faster that way than he did with the long struggles we had previously endured.

NACD provided me with support staff that I could e-mail or call any time I needed. This was a huge relief. They would evaluate him every 4 months, and then redesign his program based on his progress. NACD’s methods allowed Connor to receive his therapies multiple times a day, every day, rather than once or twice a week. This allowed him to move forward so much faster than before. It was so encouraging to see him become more at peace in his own body. It was very motivating to see his academic growth every quarter and to set new goals each visit.

Home schooling allowed me to work on social skills at a pace that he could handle. We would discuss expectations before a social activity even using a picture book or role-playing to walk through the steps. We would talk afterward about what went right, what went wrong and how to handle it better next time.

Today, Connor is very close to a “typical” child. While he still has sensitive ears, he can now focus on work without every sound in the house pounding in his head. He is so much more comfortable in his own skin. He no longer spins and rolls as he had done before NACD. He has so many more positive days than negative ones.

This child that used to not be able to enter a crowded room, went to a three-day camp with his youth group this summer. His youth leaders told me that he was the one kid that tried everything there was to try. They said that occasionally, they would be unable to find him, only to locate him enjoying a meal with new friends he had made. Connor is an active member of his youth group at church, and he volunteers with the preschool kids on Sunday mornings. He is currently attending classes on Wednesday at Pure Energy, a one-day school for middle school home school students. He thoroughly enjoys this activity and looks forward to it each week. Instead of receiving the screaming, overwhelmed child after school, I receive a young man that is bubbling over with excitement wanting to tell me all about his day. This child that used to avoid social activity, will pull together a group of neighborhood kids for a kickball game. He actively helps out around the house, and enjoys contributing to our family. He has gone from hating school to loving learning. Connor is a now a young man with a positive attitude toward his life.

Connor is doing so well now, that I sometimes forget that he had such a rough start. Every now and again, he will have a social anxiety and I will forget that this can be an issue for him. Sometimes I’ll get frustrated when he doesn’t greet someone right away, but needs time to warm up. He can be a bit quirky, but that is part of how God made him. We have had times when he has regressed, but NACD always helps us figure out what is going on and how to move forward again. When we have tough days, I just try to remember that God loves him even more than I do. I look back gratefully on the tremendous growth that God has provided for Connor over the last few years, and I look forward to even more progress to come. After all, God is not finished with either of us yet.