Home / Newsletter Articles / From Passion to Profit: The Story of AD Digital 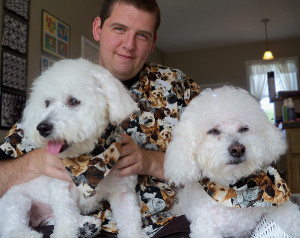 “Do you have a hobby you wish you could indulge in all day? An obsession that keeps you up at night? Now is the perfect time to take that passion and make a living doing what you love.” These are the words of Gary Vaynerchuk in his book Why Now is the Time to CRUSH IT! Cash in on Your Passion. When we think of our families, we may be hard pressed to find a parent that can’t identify at least one passion in their children. As a matter of fact, most adults have a hobby or passion that they would rather spend their time doing rather than the 40-hour week they currently endure.

It is often said of 4-H that individuals will pursue in life what they enjoyed in their 4-H program. When I look back to our years in 4-H, I consider what Adam and Amanda’s interests were and how they hold true today. In the day, Adam earned a trip to the Ohio State Fair for his dog obedience project and for his photography project. Amanda was awarded a first prize trophy for her demonstration “Drawing with Disney”. Little did we know at the time that we would be “crushing it” when it comes to Adam’s interests and that Amanda would be a junior at Huntington University, Indiana – studying Animation.

Amanda graduated from high school with 17 hours of college credit under her belt, and at that point she was ready to move on to the college life, adapting well. Adam spent a semester at a local community and technical school, but that environment was not going to be where he would find his niche. So our focus gravitated toward the work force. He spent a summer working in a factory. He was punctual, never missed a day, and did his job. However, this too, was not how he would best spend his hours. Suddenly the book about making money through our hobbies was coming a little closer to home.

After the college career and the factory stint, Ellen Doman suggested that we find Adam’s niche and consider starting a family business with his passion in mind. It didn’t take us long to figure out that he could expand the VHS to DVD that he was doing for us into something that he could provide to others for profit. In the winter of 2011 we established an LLC in his name called AD Digital, LLC. The service that he would provide initially was converting VHS to DVD of home videos and commercial tapes. Realizing that there were more services that he could provide, we expanded his services to include cassette to CD, LP to CD, slide scanning to CD or DVD, and a host of other services. So his passion of working with photos and other digital projects, as he did in 4-H, was becoming more than a hobby, it was an income!

It didn’t stop there, however. Quite by default, Adam started providing another service that had nothing to do with the digital business – dog sitting. When Amanda moved away to school, Adam inherited her client/owner of two Bichons. After 3 weeks in the company of these canines, he decided the effort was well worth the profit. He has spread the word of his willingness to take care of others’ pets and has acquired a few additional clients. His “claim to fame” that sets him apart from dog kennels or other establishments is that he keeps the furry friends by his side – NOT in a kennel or cage. There are times when AD Digital has additional “help,” so to speak.

Adam thoroughly loves doing his digital work. As a matter of fact, he volunteers his time to provide PowerPoint at church. That involves working with several people through phone calls and email so that when Sunday morning comes, the songs, scripture and special requests are just as they need to be. For Adam, that wasn’t enough. He began to video tape the services and wasn’t satisfied until he could coordinate the PowerPoint and computer with the video camera so that he could show the service live on the big screen and alternate that with the PowerPoint. His volunteer talents do not go unnoticed. The church, being so impressed with his work, has given donations toward his business.

Unfortunately, in Adam’s opinion, along with a business endeavor comes the need to understand its financial function. Creating spreadsheets and/or learning Quicken has become a group project. While Adam doesn’t look forward to bookkeeping, he is quick and rather enjoys the task of signing the back of the checks and taking them to the bank.

AD Digital, LLC is a work in progress, then again, so is the dog sitting business and perhaps more. We don’t know for sure if the digital work can eventually support him. Or will it be a combination of AD Digital and dog sitting? Or do we need to invest in a building and “dog park” for his business(es)? Is there a need for a homemade dog bakery? These are the questions that remain as we seek to help Adam reach his full potential.

More information about AD Digital can be found at www.addigitalmedia.net. Find the business on Facebook at AD Digital, LLC or AD Canine Care.