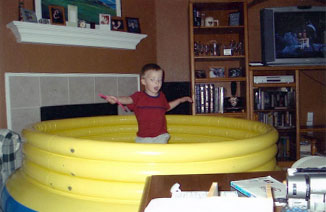 At 2 ½ our son Evan rarely gave us any eye-contact, and did not communicate outside of dragging one of us to the kitchen when he was hungry, repeating phrases he heard on TV, or echoing what we said to him. He could play by himself beautifully for hours, but would throw huge tantrums if we tried to interrupt him. We knew something was wrong, but it was still difficult to hear the Autism diagnosis. Thankfully, it wasn’t long before we were introduced to NACD. We started on program one month before Evan’s third birthday.

We soon discovered that virtually everything our son did was a stim (DSA – Debilitating Sensory Addiction). He could line up cars, trains, and blocks with laser precision. One of the first things we learned was that not only was he not learning anything from his “play,” but allowing him to continue with it was destructive. Following our first evaluation, as Evan napped, we purged many of his toys. When he awoke, we started our battle with stimming. However he was not to be easily deterred. If he couldn’t stim with his cars, he would line up drink coasters or kitchen chairs, or he’d watch Kleenex tissue float down to the floor. We knew our work was cut out for us, but with our new program in hand, we now had a plan of attack.

Affirmation of our decision to work with NACD came soon after. Within our first two weeks of doing program (badly at that), Evan grabbed a spatula off the kitchen counter and was running around flapping it and watching it out of the corner of his eye. I picked him up, plopped him in my lap, and started making faces at him. He looked at me with a clarity in his eyes I had never seen before and said, “Eyes, nose, mouth,” touching my face as he spoke. This was the first time he had ever spontaneously put three words together, and the first time he ever labeled anything. I was shocked and thrilled at the same time. He got down out of my lap and started stimming with something else, but my husband and I knew that we had made a crack in the shell that kept Evan from participating in our world.

Something we recognized very quickly was that this was going to be a full time job. We couldn’t just do program in the evenings after work and expect to overcome Autism. I quit my job and made it my full-time occupation to work with Evan. We have never regretted that decision. 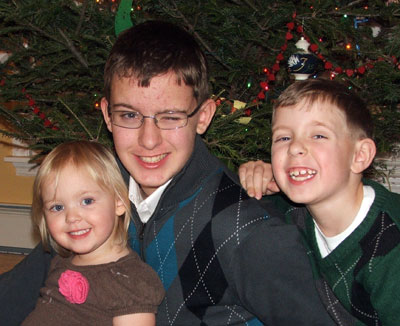 The NACD approach is very challenging. As a parent you may not feel qualified to be doing all the therapy required, nor might you feel physically able to do all that is asked of you. But it quickly became apparent that the more we stopped and redirected his stimming, the more he could think and learn. It was exhausting work, but incredibly rewarding, as Evan began to break out of his pretend world and join us.

We have been tremendously blessed to have access to a group of professionals who didn’t look at our son and see a label—they saw his potential. They had high expectations for Evan to do very well in every area of his development, and that pushed us, as a family, to achieve the goals they set.

Evan has gone from a very disengaged child to a 5th grader who loves to read, is on grade level or better in all subjects, skis, swims, has a brown belt in karate, and plays on a middle school basketball team. He loves to make others laugh, play (and argue) with his brother, and is protective of his little sister. We are still working, and still have some challenging areas (social interactions are still difficult at times), but we have full confidence that we will conquer this last obstacle. Evan is a bright boy with a lot to offer. We are thankful to NACD for giving us a way to unlock his mind.